I can’t answer that question for YOU. Only you know what drives you to write. This blog post is about what drives me personally. So buckle up for a quick dive into my psyche!

I can’t imagine any writer who doesn’t enjoy the art. Writing, in my opinion, is something that resides in your DNA. It’s a compulsion. We’re storytellers and we have stories to be told. That’s our primary motivation.

And then, there is the other part of the puzzle.

While they may enjoy it, there are probably a few authors out there who are writing their books in pursuit of the almighty dollar. Others might want fame or fortune or worldly recognition of their efforts. Some might be looking to have the results of their imagination turned to screen or show.

There’s absolutely nothing wrong with any of those. Whatever motivates you to write, it still benefits the world to have your story out there to be enjoyed.

For me though, it all boils down to one simple six letter word…

It’s a word that sometimes weighs very heavily on my shoulders, more so lately than ever before.

This is going to be a very personal post, so please bear with me as I somewhat bare my soul to you guys. But I’m hoping that it also might make you, if you too are a writer, think about what’s driving your own urge to put the proverbial pen to paper and tell the world your stories.

Now, my origin story for writing has been relayed here before. You can find it in previous blog posts and in other places on the website. You don’t need to know about that in this blog post, because I’m delving a little deeper than how I started writing.

This is about WHY I write. Which is a whole different kettle o’ fish!

Let’s turn back the clock a few years…

I had something of a midlife crisis brought about by a number of factors.

I’ve struggled on and off with mental health for a long while now. Nothing earth-shattering, like I know many other people deal with on a day to day basis, but enough to make me understand the illness better and relate to people who suffer from it to a much worse degree than I ever have. Bad relationships in my history, a feeling of low self-esteem, problems with my work and health, had all seen me spin slowly out of control.

I couldn’t sleep. I woke up shaking and feeling anxious.

I hated my job and dreaded going, often breaking down in tears. Other than that, I felt emotionally flat and didn’t want to do anything but sleep. I rarely felt any joy or happiness, it just wasn’t on the table at that point.

The doctor first prescribed me with a drug called Diazepam (which I think is like Valium?), but that just sent me to sleep. The first time I took it I ended up sleeping for two days! So, then I was switched to Citalopram, which helped no end. It enabled me to cope day to day, and slowly but surely I worked my way back to a good place.

It helped considerably that I had a good relationship with my eventual wife, who kept me stable and supported. She helped me navigate the process of starting to understand what was affecting me.

So, as I started to mentally peel back the layers of my feelings, I realized that one of the big issues I was internally wrestling with was the one of LEGACY.

There’s a biological imperative in all animals to procreate and further the species. Even sloths!

For humans, it’s a little more complicated. There is the matter of career, relationships, financial stability, etc.

I’m 48 years old this year and thus far I haven’t had children. I had a divorce, a string of bad relationships, and some horrendous debt issues that got in the way over the years. Time is a funny bugger, simultaneously going by at a crawl, but also so fast. In the moment, the pain of some of these situations feels like it’s never going to end, but then in the blink of an eye you’re through it and looking back on it with grey in your hair and white in your whiskers.

I haven’t ruled out the possibility of kids. Sorting out our health, finances and careers has been a priority, but the fact is that the clock is ticking on that front. The older I get, the more unlikely it is to happen.

Add to this the events of recent months.

For those of you I know on Twitter, you may have noticed (or not!) that I’ve not been anywhere near as active lately as I used to be.

Real life intervened, and NOT in a good way

My father was diagnosed with Alzheimer’s a few years ago.

During 2020, he started to lose weight rapidly, worrying us as a family.

Then, recently, after a collapse and an extended stay in hospital, he has been diagnosed with cancer.

To say that this revelation turned our world upside down is an understatement. It was a very difficult few weeks as the family scrambled around trying to assimilate the news and deal with coping strategies both physical and mental.

It also left me thinking…

What will I leave behind when I scuttle off this mortal coil?

Yeah, I know, that’s maybe a bit of a morbid thought, but it does dwell in the back of my mind quite frequently.

That’s what my books are to me.

They’ll be what I leave behind when I’m gone.

My saga is a big story told over a wide canvas, and I love it. I am dedicated to getting it out of my head and onto the page so that, hopefully, people can enjoy it. I’m not looking for fame. I’m not looking to make my fortune (though I’m not averse to this!). And I’m not looking to have my creation up on the silver screen…or even the telly-box (though that would be fucking awesome!).

What I want is to know that I published my story.

And that someone out there bought it, read it, and enjoyed it.

I want to know that somewhere out there, a battered copy of one of my books is sitting on a book shelf. Maybe in someone’s house, or maybe tucked away in a second-hand bookshop somewhere. And that long after I’m dead and buried someone might stumble across it and give it a read.

Or maybe someone stumbles across a digital copy. Let’s face it, in this day and age once something is out there on the interwebs, it’s pretty much always going to be there.

I don’t have children to live on after me and pass my genetics down through generation after generation.

But maybe, just maybe, my stories can outlive me and have some tiny impact on someone’s life years after I’m gone.

That…is why I write. 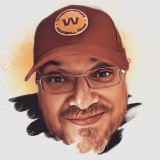 ⭕️Commissions are opening up!⭕️
In a pinch with some things that are out of my control and need a car part and a dryer. Retweets are greatly appreciated! Commission page form in my bio. Thank you and bless you all! 💜❤️😇